Lots of QRM due to the strong wind. Good condx on all bands but low activity on 30 metres as often.

Highlights:
Nice view from the top.

Lowlight:
No possibility to escape from the strong winds because of the limited space near the top.

From Schönwalde am Bungsberg take the road (L216) to the north. Follow the signpost to „Bungsberg“. The road takes you directly to the car park near the top.
Follow the track through the forest and soon you’ll be standing on the top which is just slightly higher than the surrounding hills.

Bungsberg is the highest peak in Schleswig Holstein, the northernmost of the 16 states of the Federal Republic of Germany. It is the only SOTA reference there and about 20 km from the place we were staying for our vacation. Hence the only question was „when“ I’ll do the activation.

As several times before, my daughter Marie accompanied me on this short trip.
When we reached the top, a strong wind was blowing from the north west.

There was a low hedge that offered some protection against the wind, but I couldn’t set up my station there without disturbing other people. So I decided to set up at an opening in the fence – directly exposed to the wind.
We brought enough warm clothes against the cold so the low temperature was no issue. But there was nothing I could do against the noise caused by the wind, except turn the volume of the KX3 up very high.
Under such conditions I didn’t bother searching for S2S contacts but started my activation straight away. As expected, activity on 40 metres was high. More 25 QSOs went into the log in about 20 minutes.
On 30 metres a single S2S QSO could be completed under strong temporary QRM. The source remained unknown and disappeared after a while.

Then I took a break and talked with some people about what I was doing here. The conversations are pretty much the same from one summit to the other. Visitors are always surprised when they hear about radio contacts all over Europe or even across the pond with a few watts.
After about twenty minutes I resumed the activation on 20 metres. The wind had abated somewhat. 20 metres was a surprise as I could hear stations I usually work on 40 metres when I’m further south. One of them was Roger, F5LKW, with whom I had a sked. His signal was loud and clear and I was happy to have his call sign in my log.

Finally we got a few raindrops and decided to pack up and return home.

Again it was lots of fun. Thanks for the QSOs! 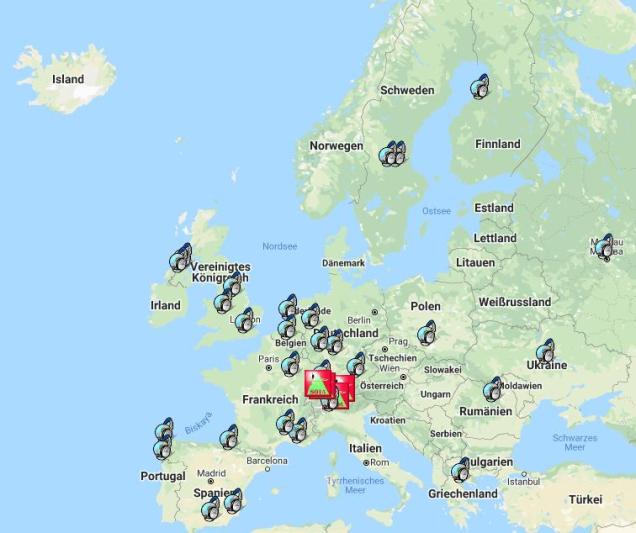