From Nabern, turn right at the entrance of Weilheim towards the cemetry. Park the car there or alongside the road that leads up the hill.
From there, follow the road „Weinsteige“.

Limburg is a lovely hill at the edge of the Swabian Jura. It has an unobstructed view to the northwest and is one of the best choices for Trans-Atlantic DX in my region.
But when I reached the parking lot this time, the summit was hidden behind a thick layer of fog. Temperature was only 4°C. I had no idea how long it would be possible to stay at the top. The advantage, however, was that the summit was completely deserted and I had lots of room for my antenna installations. 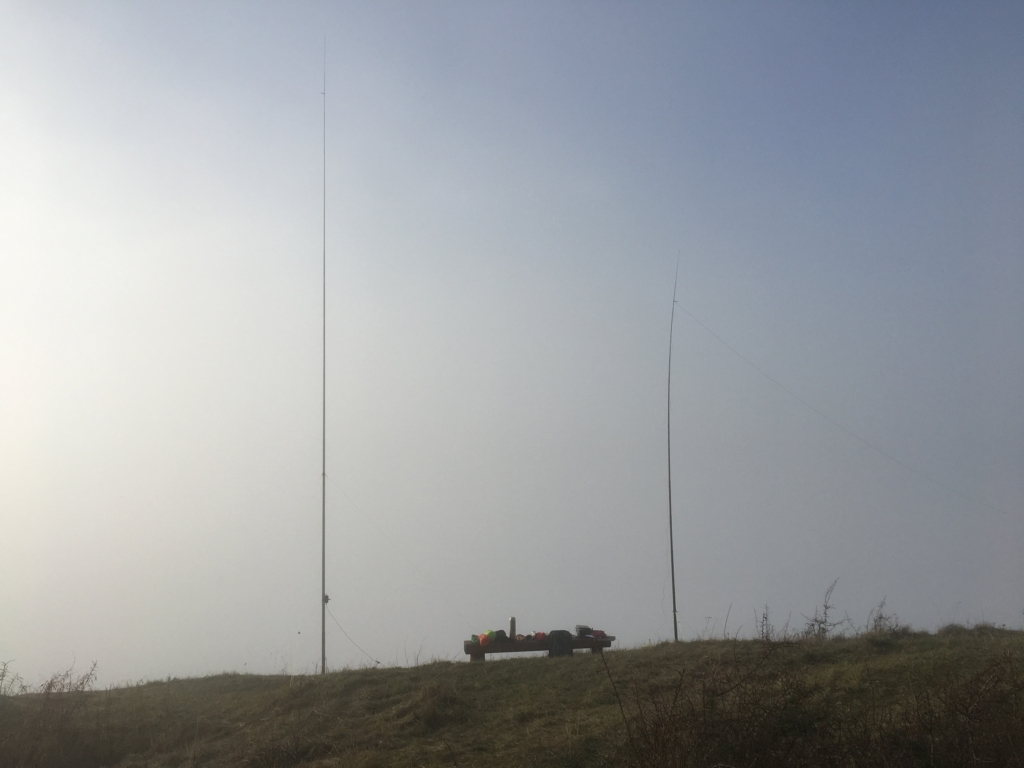 By the time I started setting up, the sun could be seen through the fog and shortly after I was QRV the fog had thinned out and it became more pleasant in the warm sunlight.

I started running on 17m but it soon was clear that with the double CME that hit earth’s magnetic field earlier this week, condx were not as good as last year. There were only few QSOs and none of them was trans-Atlantic S2S. I worked a few chasers (EU and NA) and explained visitors what I was doing while I waited for the conditions to improve.

Just before 15:00 utc 17m started humming with DX S2S. Suddenly there were so many spots on SOTLAS that it was hard to keep track of interesting stations. I had three consecutive S2S contacts into Arizona and Colorado and – to my big surprise – could work HB9BHU who was on a mountain top in Martinique!
A brief excursion to 15m resulted in only one S2S QSO. Then, around 16:00, the higher bands closed already and it was obvious to return to 20m. The band was still in good shape and I could work some more EU and NA S2S. Eventually my CQ’s remained unheard and I realized how cold it actually was. The sun had set about an hour before and since station and two antennas still had to be dismantled, I pulled the plug.
It was completely dark when I left the summit but it was no problem to find the trail with my head torch – until the fog returned, about half way down. Then, visibility dropped below 10 metres and it was a real challenge to stay on the (muddy) trail. Eventually I reached the car, had a snack and headed back home.

It was tons of fun. Thanks for digging my tiny signal out of the noise!